Road Runner - To Beep or Not to Beep
Merrie Melodies 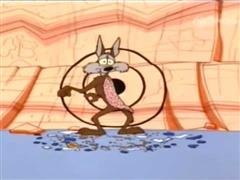 The Dish Ran Away with the Spoon

Dishes and utensils wash, dry, and stack themselves. A duster plays a silverware box like a piano while a salt-pepper-and-sugar set sings. The spoon proposes to the dish (interrupted by a cry from a baby spoon), then plays percussion on some pans and jam jars. Some teacups do a can-can, then a centipede-like conga line. The Swiss cheese yodels. The blueing sings "Am I Blue?," joined by a potato crying from all its eyes. An egg dances, slips on some lard, hatches, and sings "Young and Healthy." A lump of dough rises like a ghost and dances over to a packet of yeast, which it mixes into water and drinks, then grows, a la Jekyll and Hyde. It threatens the dish; some utensils fight back, lobbing canned goods from a spatula catapult. More attacks with cheese graters, popcorn, a rolling pin, and an electric fan, turn the dough into muffins, a bundt cake, a pie, and waffles.