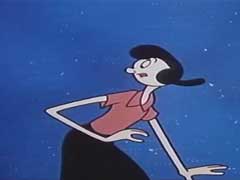 Popeye tells Swee'Pea the story of Jason and the Golden Fleece. Popeye goes back in time to ancient Greece. In this version, Popeye plays Jason, Wimpy is the King, the Sea Hag plays the Queen, and Brutus plays Jupiter, Neptune and the Minotaur! There's a surprise ending. The King sends Popeye to capture the Golden Fleece. Popeye's singing annoys Zeus and Pluto, but he escapes their thunderbolts of rain. He also escapes the Amazon Goons and the Sea Hag. He lands on the Sea Hags Island, follows a sign that says, "Golden Fleece This Way," and ends up in a sideshow tent containing golden fleas. He fights a Brutus Centaur, wins, and then returns to the present. In a surprise ending, he feels itchy, and then finds a golden flea which grins at him.