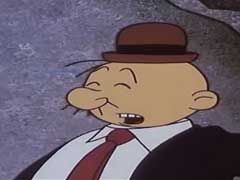 After The Ball Went Over

Olive is enjoying the game of ping pong between Popeye and Brutus. But the two romantic rivals are taking their game seriously indeed, especially since Olive has promised the winner a kiss and an extra portion of lunch. Each player plays tricks on the other. Brutus puts jumping beans in the ball. Popeye replaces the ball with an egg. And so on. But Popeye is overconfident, certain that the writer will include the spinach gimmick into the story.