The Pink Panther - The Pink Phink

The Pink Panther - We Give Pink Stamps 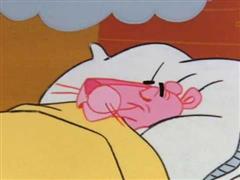 The Pink Panther tries laying in the hammock; it throws him out every time. He does some work around the house. The Pink Panther decides to fix basement stairs. Every time that he turns on the light bulb, it goes out again. He plugs in his electric saw. It won't go off, and it saws down his house. When he tries to take a shower, water comes out of his ears. He loads his shotgun and waits for the next disaster. He falls down to the basement using a power saw, lighting gunpowder and killing the narrator.