Tom & Jerry - The Night Before Christmas 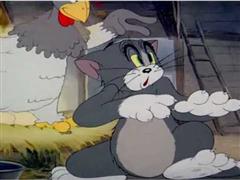 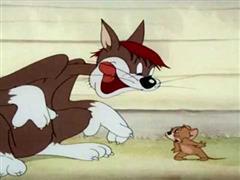 Jerry crashes a vase onto Tom's head, which gets Mammy to throw Tom out. Jerry revels in his freedom, among other things turning Tom's picture into a Hitler caricature then spitting on it. But he soon tires of this, and under a flag of truce, hatches a plan with Tom. The abnormally talkative duo stage a grand chase, but whenever they're out of sight of Mammy, they fake it, pausing for patty-cake, a turkey leg, and a drum jam session. Eventually, Tom chases Jerry under a rug, then swaps in a tomato, which Mammy crushes. With Jerry apparently vanquished, Tom is rewarded with a pie, but when Jerry tries to claim his share, Tom shuts him out.